Since January, this ragtag army of retail trading apes has roamed the exchanges, looking to squeeze short sellers wherever they can find them.

They’ve been able to maintain pressure in their first two major targets, but their attention and success outside of GameStop Corp. (NYSE: GME) and AMC Entertainment Holdings Inc. (NYSE: AMC) has been short-lived.

But as Future of Wealth Head Trader Lance Ippolito is about to explain, this misfit band of traders is turning their sights to cannabis meme stocks like Tilray Inc. (Nasdaq: TLRY).

Back in February, Tilray had a parabolic move to the upside. That lasted for about two days and then fell right back down.

Not long after the move, the cannabis meme stock made an appearance in the “bust” slot of a February installment of “Bang, Buy, Bust” — and rightfully so.

The stock trended lower for the next three months until WallStreetBets stepped in. 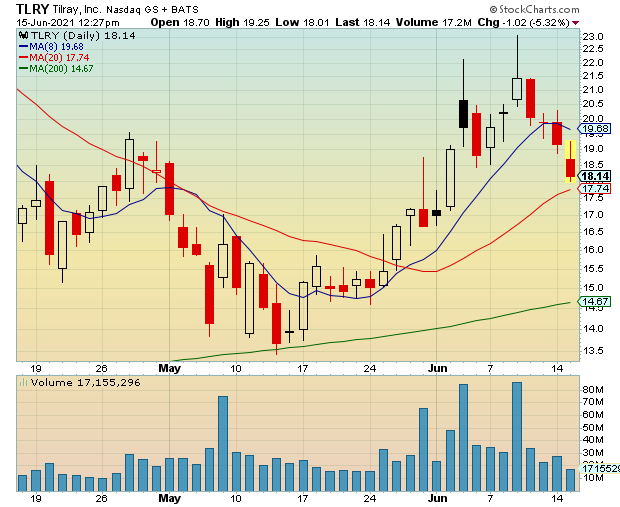 What Lance sees on Tilray’s daily chart right now is what he likes to call the “Humpty Dumpty, I’m stuck in the mud and don’t know where I’m going” pattern.

He did see some volume breakout, but each time it’s been met with a selloff.

And usually when you have volume to confirm a breakout like Lance saw last week, it usually moves to the upside, but not for Tilray.

So if retail investors want to become the next marijuana millionaire, they’re going to need to look somewhere else in the meantime.

Check out Lance’s short video below and let’s talk about the cannabis meme stocks situation, and he’ll give you his favorite of the four names he breaks down.

He has three more tickers and charts you need to see before you put a dime into another pot stock. Leave us a comment and let us know if you think the weed meme move is headed to the moon, or if you think it’ll go up in smoke…

He found a little-known pattern that occurs every Tuesday at 9:30 a.m. And traders who catch onto it could find themselves in the driver’s seat for the easiest four-day gains they’ve ever seen.

Tom kept this strategy to himself for a year…

But now that he’s been able to prove his theory on real-money trades with gains like 90% on RIOT and 122% on MRNA, he’s ready to go public with it.

And retail investors stand to benefit from this strategy the most!

See what he trades on Tuesdays.