We ended October with a painful week of trading just ahead of a presidential election, but WealthPress trader Jeff Yastine expects a new stock market rally to develop into the year’s end.

Of course, that doesn’t mean we won’t see a few more big declines in the coming days. But those will be healthy developments that keep investors off-balance and set the stage for a strong new stock market rally to come.

In a video I posted last Friday, Jeff pointed to what he calls the stock market’s “most important chart.” It breaks down the Chicago Board Options Exchange’s put-call ratio.

It simply measures bullishness and bearishness of options traders based on whether they’re buying calls or puts. A “call” is a bet a stock is going to go up by a certain date. A “put” is a bet a stock will go down.

When he filmed his last video, there was extreme bullishness the likes of which we’d rarely seen in the market over the past 13 years.

Within days of recording that video, the Dow Jones Industrial Average fell more than 900 points… the Nasdaq dropped 500 points. Those dips came at the end of a slow-motion sell-off that saw both indexes, the S&P 500 and the Russell 2000 all fall between 7%-8% since the start of October.

If you go back to the markets’ all-time highs set in early September, we’re now in the midst of a 10% correction.

Here’s the chart from last Tuesday. Note the peak bullishness: 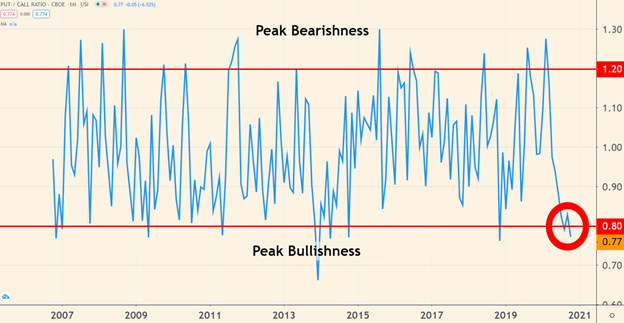 And here we are just a few days later. Note the sharp trend reversal toward peak bearishness since last Tuesday: 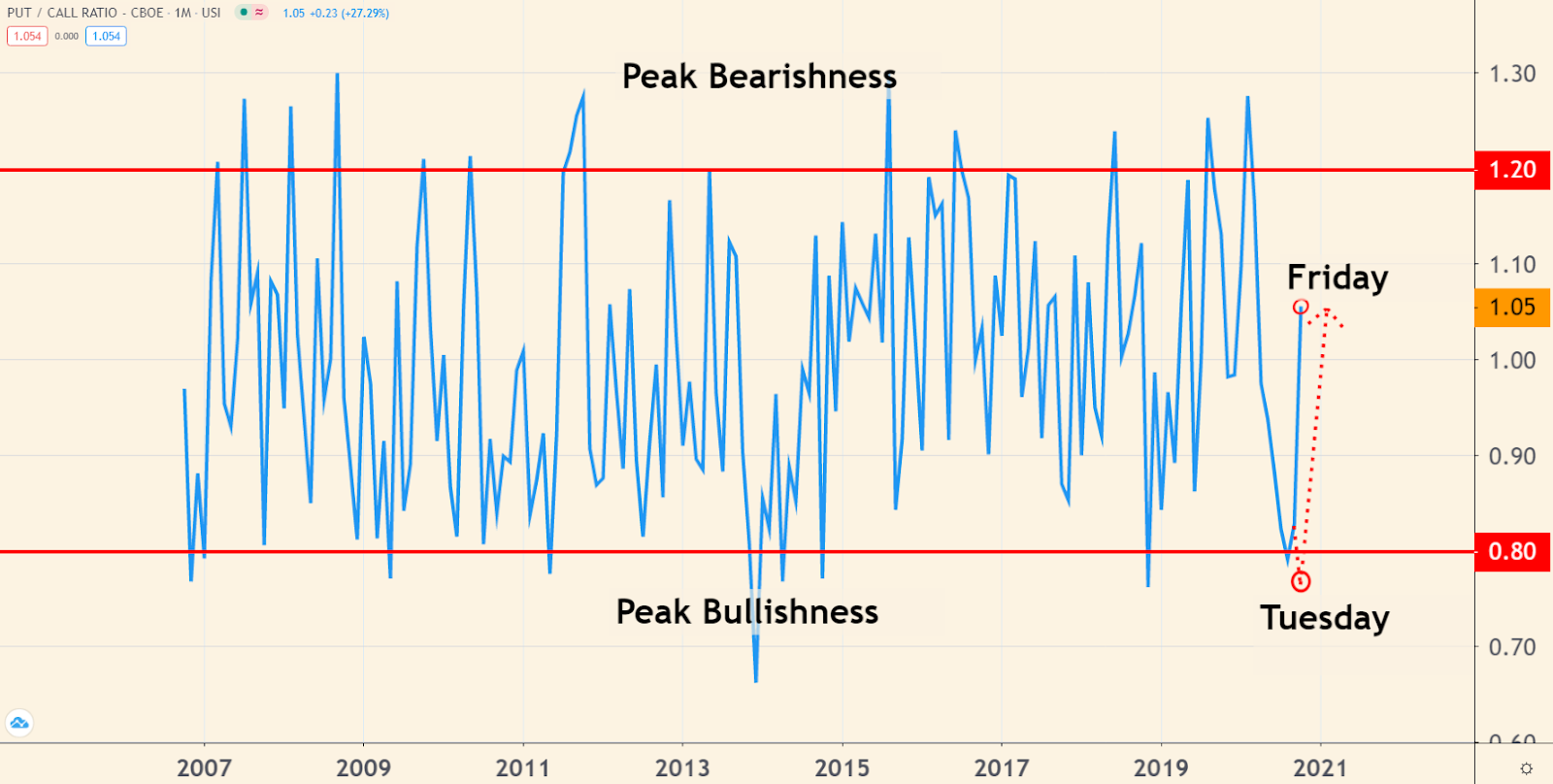 Why This Reversal Could Point to a New Stock Market Rally

The above charts illustrate just how fast the sentiment among options traders has changed from peak bullish to peak bearish… in a matter of days.

In fact, at one point during the week’s sell-offs, the put-call ratio rocketed toward the “1.10” level, which means options speculators hastily shifted to buying more puts than calls… They expect even sharper sell-offs to come.

In effect, the dips we saw this week — and the ones we’re likely to see during election week — are helping clear the decks. They’re erasing the extreme optimism and introducing doubt and fear. That doubt and fear will in turn set the stage for a new stock market rally.

Check out Jeff’s follow-up video below and he’ll explain why in more detail. He’ll also talk about some intriguing developments on the COVID-19 vaccine front and the effects that could have.

Then share your thoughts in the comments below. Do you think we’ll see a new stock market rally into the end of the year? Why or why not?

P.S. Chuck Hughes, who pulled $6.1 million from the stock market over the past seven years, has agreed to do a one-time interview with me.

In it, Chuck reveals how his secret trading methodology called Trophy Trades has allowed him to bank consistent gains year after year… completely stress free.

Watch the interview today and find out how Trophy Trades can completely transform your annual returns — and your life!